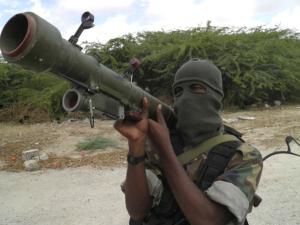 An al-Shabab fighter poses during a military exercises in northern Mogadishu. Foreigners provide Somali Islamists with cash and skills to fight the civil war, although it is reported that many are unhappy with their fighting methods, and some have defected to the government side.

An al-Shabab fighter poses during a military exercises in northern Mogadishu. Foreigners provide Somali Islamists with cash and skills to fight the civil war, although it is reported that many are unhappy with their fighting methods, and some have defected to the government side.Mogadishu - After Mohamed Ibrahim Suley joined Somalia's al-Qaeda-linked insurgency, foreign fighters taught him how to plant bombs and plan assassinations. He fought alongside an Indian, an Eritrean and an American. But after five years, Suley grew disillusioned by the deaths and by the actions of senior commanders. Then one day, during a firefight against government forces, one of the foreign fighters deliberately shot Suley. The foreigner was displeased because Suley had stopped to attend to a wounded friend. Hundreds of foreign fighters have brought battlefield knowledge and cash to the insurgent group called al-Shabab. But their hardline ideology alienates many Somalis. For his part, Suley abandoned the militia after the foreign fighter turned on him. “I defected from al-Shabab because I was deliberately shot by a foreigner,” said Suley, 29, pulling up his shirt to show bullet scars. “He shot me in the back after I had defied his order to not to help some of my friends.” Suley's experiences, relayed at a fortified government position in Mogadishu in an interview arranged by a public relations firm working for the United Nations, illustrate the complex relationship between Somali insurgents and foreigners who have joined them to topple the country's weak UN-backed government. The foreigners are often blamed for promoting a more hardline version of Islam than Somalis are used to, alienating the local population, but al-Shabab cannot afford to dump them. Foreign intelligence services say a few hundred foreign fighters are helping train al-Shabab and carry out attacks. Most are from other countries in East Africa, but a few come from further afield - Chechnya, Pakistan and even America. They provide cash, skills, and volunteers fluent in English to become suicide bombers. Some teach the insurgency increasingly sophisticated tactics, propaganda and bomb-making.
On the advice of teachers at Suley's religious school in the city of Kismayo, he and 39 other students joined an Islamist training camp in 2006. They learned to plant land mines and plan assassinations.

Among the instructors, Suley said, was an Indian man nicknamed Abumuslim and an Eritrean. Later, in the Somali capital, he briefly met a white American recruit - Omar Hammami from Alabama, according to Suley's account. Nicknamed Abumansur Al-Amriki, Hammami has starred in al-Shabab recruitment videos that have been posted online. Suley said: “He would organise and lead to us to the fighting. Most of time he was carrying a walkie-talkie.” 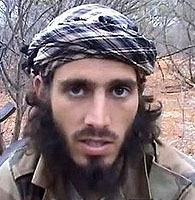 He added that al-Shabab fighters preferred walkie-talkies to cellphones because they feared cellphone conversations could be intercepted. Sniper attacks are rising and intelligence analysts say it's because of the training camps run by foreigners. There was one insurgent sniper attack in December 2009, but in December 2010 there were 18, according to the African Union, which has deployed 8000 troops to Somalia to back the government. Lauren Gelfand, the Africa and Middle East editor of Jane's Defence Weekly, said some foreigners had high-ranking positions within the insurgency and did long-term strategic planning but others were young recruits hoping to gain experience in Somalia to start their own Islamist uprisings at home. Fighters who do not have military skills but can speak fluent English have been used as suicide bombers because they can get past checkpoints. Suley said many of his friends and classmates who took up arms with him had died in the war.
“Every day I would see casualties from my side,” Suley said.
He says he became disillusioned by the deaths and from seeing senior commanders send young recruits - often children - to the front lines while they themselves stayed out of harm's way. Being shot by the foreign fighter was the last straw, but now Suley has nowhere to go. A Nairobi-based security official said scores had defected from al-Shabab since 2007 but there was no programme to reintegrate them and if Suley ventured outside the small area controlled by the government he was likely be killed. The government - which is totally dependent on foreign support - is trying to design a reintegration programme but donors are relucant to back it because disarmament is complicated and the financial commitment could grow. Somali defence minister Abdihakim Mohamud Hajji Fiqi said there have been at least seven defections so far in 2011. - Sapa-AP


The Making of an American Terrorist