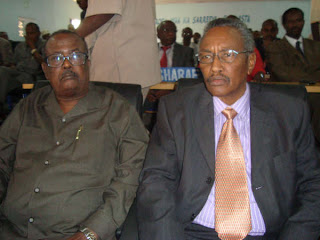 update on US Speaking Out
Pirates of Somalia, 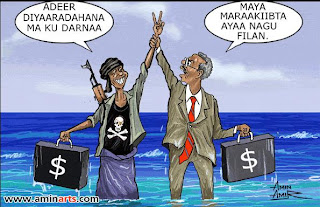 US expresses concern about maritime piracy
LONDON, Feb 16 (Reuters) - Somali piracy has evolved into a transnational, organised criminal network that risks becoming ingrained in the country's economic and social structures, the head of the U.S counter-piracy unit said on Wednesday.Attacks on vessels off the coast of Somalia have been growing rapidly since 2007 as young Somalis in small skiffs with their AK-47s and rocket propelled grenades take to the waters to seek their fortunes.Donna L. Hopkins, coordinator of Counter Piracy and Maritime Security for the U.S. government, said it had become apparent that other nationalities were hoping to reap the benefits of what has become an increasingly lucrative activity."Somali piracy has grown from being essentially a garden variety, local, off the coast protest against illegal fishing ... into a seriously networked and capable, transnational, organised and criminal enterprise," she said.
"We think there are other fishermen, fishermen other than Somali nationality, who are colluding in this business and helping to share the spoils."Ransom payments have shot up over the last five years and now average around $4.5 million to $5 million per ship, from around $150,000 to $300,000 previously, according to Dieter Berg, head of the marine division at reinsurer Munich Re.By using bigger "mother ships" equipped with more sophisticated equipment, pirates have been able to carry out increasing numbers of attacks in recent months and range further away from the Somali coastline.Last week Somali pirates seized two oil tankers in two days, capturing a Greek ship carrying Kuwaiti oil to the United States after taking an Italian oil vessel.Hopkins said it was likely that sophisticated groups, potentially operating out of financial centres, had established networks to distribute fuel and weapons and transmit ransoms through money laundering networks."We need to find out who is complicit in the financial networks, other logistical supporting networks that are enabling pirates," she told reporters at the U.S. Embassy in London.Regional instability along a critical trade route combined to make Somalia a "perfect storm" to fuel piracy, Hopkins said and warned it risked becoming an insurmountable problem."It's pretty clear from the reporting that's coming out that piracy is becoming deeply ingrained in the Somali economic and social structure," she said. "As long as there is no effective government to control the Somali territorial water and coastline this is going to be a problem."Hopkins dismissed "deliberate links" between piracy and terrorism, but said militants would be attracted by the financial gains."Terrorists, no matter how ideologically pure, need money. And I suspect they are not above taking what they can."

The United States Response to Piracy off the Coast of Somalia
UN: Somali Piracy Threat Outpacing Efforts to Stop It