WASHINGTON — A 20-year-old Saudi Arabian student living in Texas has been arrested by federal agents, who charged him with planning to build bombs for terror attacks in the United States, the Justice Department announced Thursday. 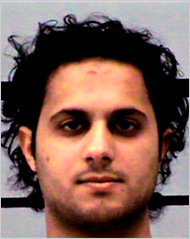 Khalid Ali-M Aldawsari
According to an affidavit filed by the Federal Bureau of Investigation, the student, Khalid Ali-M Aldawsari, indicated in online research and in a journal that he was considering attacking the Dallas residence of former President George W. Bush as well as hydroelectric dams, nuclear power plants, nightclubs and the homes of soldiers who were formerly stationed at the Abu Ghraib prison in Iraq.
Mr. Aldawsari, a business major at South Plains College in Lubbock, Tex., is in the United States legally on a student visa, the bureau said. He came to the government’s attention on Feb. 1, when a North Carolina supply company reported that he had tried to order five liters of a chemical that can be used to make an explosive..more NYT
Posted by Unknown at 4:21 PM