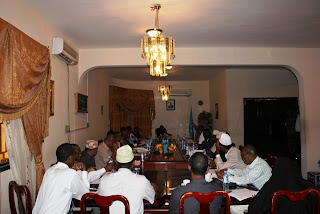 08.02.2011 … The Transitional Federal Government Council of Ministers has met today for an extraordinary meeting at its headquarters. The meeting was chaired by the Prime Minister Mr. Mohamed Abdullahi Mohamed and discussed the way forward and the challenges presented by the ending mandate of the Transitional Federal Institutions on August 20, 2011.


The council of Ministers also discussed the Transitional federal Parliament’s decision to extend its term for a period of three years and took note of the view of the Parliamentarians who saw this step as necessary to prevent a political vacuum and constitutional crisis during the transition. The Cabinet also noted its own continuing efforts in crafting and presenting options on the way forward.

On the other hand, the council of ministers took note of the concerns raised by the International Community and their reaction to the decision of the parliamentarians to extend their term for three years as well as other challenges that may by faced by the TFIs. The Cabinet also welcomed the dialogue, consultations and advice of the International Community but reaffirmed that the ultimate decision on the way forward belongs to the Somali People represented by the Somali Government.

Finally, the Council has decided to reiterate the leadership role it plays and continue the wide consultations it has started with the different government institutions, diverse segments of the Somali People and the International Community to prevent a political vacuum or a disruption to the functioning of the Constitutional Institutions of the Country.’
Communication Officemedia@opm.gov.so
Garad Salad Hersi
Press Officer office of the Prime Minister
Mogadishu, Somalia
Posted by Unknown at 9:48 AM