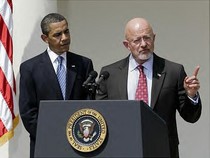 Al-Qaeda is probably plotting a number of terrorist attacks against the U.S. homeland in order to maintain worldwide attention focused on their political issues, according to a review of Director of National Intelligence James Clapper's testimony before a U.S. Senate panel on Wednesday.

Clapper, along with CIA director Leon Panetta, appeared before U.S. Senators only two days after prosecutors in New York revealed announced the successful law enforcement operation against a radical Islamic threat.
Federal prosecutors last week charged seven alleged Taliban associates -- two of them U.S. citizens -- with trying to provide assistance to the extremist group’s military efforts in Afghanistan. The two Americans were identified as Alwar Pouryan and Oded Orbach.
During his testimony, Clapper stated that al-Qaeda’s ability to perpetrate large-scale terrorism attacks --  such as the September 11, 2001, attacks -- is weaker than it was in past years thanks to US operations stateside and abroad against Islamic extremists.
In his statement, Clapper claims to believe that al-Qaeda’s leadership is becoming more decentralized and focusing on targets that can easily and swiftly be attacked without notice.
Clapper testified on Wednesday before the Senate Select Committee on Intelligence, which is assessing how Congress should respond to international threats. Critics of his past statements and gaffes believe that the former Navy admiral will attempt to mend his tarnished image as a counterterrorism leader.
For instance, last week he testified that Egypt's Muslim Brotherhood was a secular organization. That statement surprised terrorism experts and intelligence officials who are more than familiar with the Muslim Brotherhood's ties to terrorism and terrorist groups and its advocacy of Sharia law.
Several terrorism experts have told the Law Enforcement Examiner that al-Qaeda has all but abandoned Afghanistan. Clapper is expected to tell the panel of Senators that it has been migrating from its traditional base in the Afghanistan-Pakistan border region to Somalia and Yemen on the Arabian Peninsula.
But al-Qaeda continues to recruit "jihadists" for attacks on Western countries, Clapper said. And some of those recruits are Americans.
As a result, law enforcement agencies have stepped up their arrests of suspected terrorists in the United States recently, according to an official from the National Association of Chiefs of Police.
“Plots disrupted during the past year were unrelated operationally, but are indicative of a collective subculture and a common cause that rallies independent extremists to want to attack the Homeland,” Clapper said during his testimony.
The arrests within the U.S. homeland and the military successes in Iraq and Afghanistan, as well as U.S. assistance to Pakistan, are helping to eliminate the al-Qaeda threat, and so its leaders must seek alternatives to past operations
Jim Kouri
Posted by Siad barre at 10:40 PM