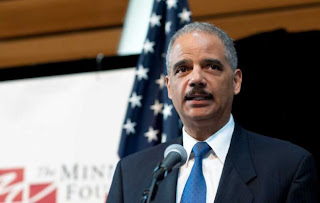 MINNEAPOLIS (AP) — U.S. Attorney General Eric Holder visited Minneapolis Friday to praise the city for its program to reduce youth violence, but was interrupted several times by outbursts from protesters who claim the government has been unfairly targeting anti-war activists in a federal investigation.
Holder was in Minnesota to headline a conference on youth violence prevention, and to meet with young adults from the area's Somali community — who have felt under fire in recent years as authorities investigate the travels of men who returned to Somalia to possibly fight with a terror group.
He also held a larger closed-door town hall meeting with area Muslims to talk about their concerns about law enforcement and "Islamophobia."
But the dozens of anti-war activists who attended the morning conference on youth anti-violence stole some of the spotlight. They said Holder was responsible for the September FBI raids and subpoenas of local activists, and that he has the sole power to stop the grand jury investigation into allegations they provided material support to terrorists.
Tracy Molm, a former University of Minnesota student whose home was raided, was the first protester to interrupt Holder's speech. She spoke with him afterward.
"The only phrase he used over and over again was, 'We're going to have to agree to disagree,'" she said. "I have a movement of people around the country and outside who agree with me, so it's on you to stop this."
The activists cite a September Inspector General's report that they say criticizes the FBI under Holder's administration for improperly targeting advocacy groups such as Greenpeace and People for the Ethical Treatment of Animals. The lengthy report said the basis for opening some investigations of those affiliated with groups was "factually weak." In some cases, the report said the FBI classified cases of nonviolent civil disobedience as "Acts of Terrorism."
Molm said Holder told her he has a different interpretation of the report.
She and other protesters were escorted from the forum, but could be heard chanting and drumming outside, as Holder praised the city of Minneapolis for its program to reduce youth violence. Holder pledged the Department of Justice would support the program, and said he plans to bring it to a national scale.
He said reducing youth violence is a "moral calling" and one of the most important tasks in shaping the nation's future. Minneapolis Mayor R.T. Rybak said the program has led to a reduction in the numbers of youths involved in violent crime, including youth victims.
After the conference, Holder met with young adults in the Somali community, and held a larger town hall with members of the wider Muslim community.
U.S. Attorney for Minnesota B. Todd Jones, who was with Holder all day, said the attorney general met with the young Somali adults because that age group has been affected by the men who traveled to Somalia to possibly join al-Shabab, as well as a more recent federal investigation into human trafficking of young girls for sex.
"I don't think it's lost on anybody that we have some attention to pay to these issues involving Somali youth," Jones said. He said Holder met with those ages 18-29 for about 40 minutes.
"They're concerned about issues of profiling, harassment, perceptions of harassment. They are concerned about Islamophobia, being targeted, and the demonization of their religion, to a certain degree," he said.
Jones said the group had suggestions for law enforcement and prosecutors. He declined to be specific.
"The AG did a lot of listening," Jones said. "He very much appreciated the opportunity to hear from folks in an unfiltered way."

Jones said the prosecutions have ramifications in the community when it comes to perceptions and stereotyping, and the overarching theme was that many felt they were being "demonized" for their religion. Jones said he and Holder made it clear the Department of Justice doesn't prosecute communities, and works to protect communities from hate crimes.
Abdirizak Bihi, director of the Somali Education and Social Advocacy Center, attended the town hall meeting and said he was impressed.
He said Holder seems to genuinely care about civil rights issues Somalis face. Holder talked to the group about the different ways they can fight discrimination and how important it is for police to help them do that, Bihi said. Holder also distributed material on legal advocacy resources.
"I was very glad that he was well-immersed on the issue," Bihi said, adding that Holder made it clear that part of his job was to protect Americans from domestic and foreign terrorists.
The group was shown a promotional video on Somalis living in Minnesota, but Bihi said it was "too perfect," and didn't portray a realistic view of the issues.
"It kind of showed a great picture that was beautiful," he said. "But the issues confronting our youth, making them vulnerable to gang violence or radicalization, were not presented."
Saeed Fahia, executive director of the Confederation of Somali Community in Minnesota, said he was impressed to see so many powerful African Americans together — referring to Holder, Jones and U.S. Rep. Keith Ellison.
Fahia said he thought the meeting was productive, but that his most important question for Holder was never answered.
"Why did he feel he needed to meet with Somalis as opposed to other groups?" he asked. "Why  Read more: http://www.stamfordadvocate.com/news/article/Attorney-General-s-Minn-visit-marred-by-protests-1398885.php#ixzz1NbGUX9Ed
Posted by Siad barre at 4:54 PM