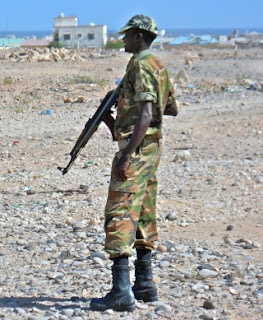 Puntland security forces have conducted operations and increased their presence in several cities across the region due to recent assassinations and attacks in the commercial port city of Bosaso and Galkayo.
Puntland’s police arrested at least 10 people in Bosaso after conducting door-to-door searches and investigations are underway after police received tips that more attacks were planned for the city, according to Said Jamal, the head of police in the Bari region.“We were informed by some very reliable sources that some people, who were already under the police surveillance, have been hiding in the city to carry out more attacks," the police chief told Somalia Report. He added that his forces would stop anyone suspected of wrongdoing.Security has also been tightened in the capital Garowe as more security personnel were seen patrolling the streets of the capital in the days after the Galgala incident and the killing of prominent businessmen in Bosaso.Both Bosaso and Galkayo have also witnessed rampant killings and roadside bombs in the last few months, and the officials are taking necessary steps in ensuring that law and order is maintained.At least ten people were arrested in the city in the past week alone for allegedly having ties with militant groups in the southern Somalia.Puntland Accuses Somaliland of Supporting Sheik AtomMeanwhile Mohamed Jamal Nor, the Puntland commissioner for the disputed region of Sanag, accused Somaliland authorities of supporting the recent insecurity in Puntland as well as providing training, weaponry and logistic support to Sheikh Mohamed Said Atom (Atam), whose militia has been battling Puntland’s security forces in the mountains region of Galgala.“We are sure Somaliland has ties with terrorists who are causing a nightmare in our cities. We warn the Somaliland administration to leave our affairs to us,” the commissioner said while speaking in Baron.Puntland has enjoyed relative peace since the fall of the government in 1991 and established its semiautonomous authority in 1998. In recent months, its peace and stability has been threatened by attacks and assassinations against government officials, business people, and religious leaders.
Posted by Siad barre at 5:10 AM