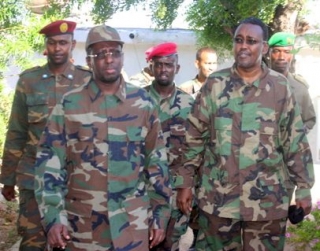 Somali President Touring the Frontlines
senior al-Shabaab leader was killed today as the Transitional Federal Government (TFG) forces, backed by African Union peacekeeping forces (AMISOM), battled the militant Islamist group al-Shabaab for control of Bakara Market in Mogadishu.Terror Free Somalia confirmed that Abu Hubeyda was killed and is believed to have been among the top leadership of al-Shabaab's Mogadishu group. The al-Shabaab leader was shot and seriously wounded by the government forces as he was busy coordinating the anti-government offensive. He was later rushed to a local hospital in Daynille, a district under the control of the al-Shabaab, where he died from his wounds."We couldn’t manage. His wounds were severe and he had badly bled before being brought here," Abu Hubedyda's doctor told Somalia Report on the condition of anonymity.Al-Shabaab fighters took his body and quickly buried him in Afgooye district for fear that if the young fighters saw his demise then they may lose morale to continue the jihad.Jamal Yaree, an 18 year old former al-Shabaab fighter who defected to the TFG, knew Abu Hubeyda well and said he was the head of al-Shabaab in Bakara and in charge of the coordination of attacks and counter attacks.AMISOM Spokesman Paddy Akunda, speaking exclusively to Somalia Report while in the Halane base camp Mogadishu, said that they managed to kill Abu Hubeyda who they considered a main obstacle."Taking over Bakara is only a matter of days, just a little more effort and we are there. Very soon the business will resume after we flush out the al-Shabaab rebels," said Mr. Akunda."The Red Mosque is now under our control and we are advancing towards the centre of Bakara Market gradually, that is a boost to the forces. We will confirm the rebel leader's details tomorrow because we didn’t manage to see his corpse," he explained.The AMISOM Spokesman confirmed that 22 al-Shabaab fighters were killed while one AMISOM soldier died in the clashes.The Somali President, in a rare event, toured Radio Mogadishu headquarters and gave a lengthy speech on the gains made by TFG and AU forces, calling it a boost to the Somalia peace process."Victory to the people of Somalia, and congratulations to the Somali government forces for the bravery they have shown today," said the president.
"To the foreign fighters: its time you head back to your respective nations and the fighters time has come for all weapons to be laid down. The children that have been brainwashed to join the war need to go back to their parents," said the president on the radio.Our correspondent toured the frontlines in Howlwadag to witness the fighting and confirm that TFG forces did advance as several buildings and land previously held by the insurgents were placed under the TFG control. 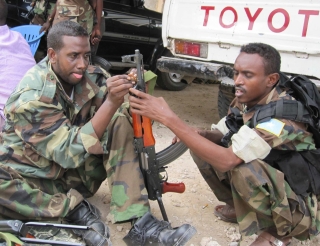 TFG Soldiers Preparing to Fight in Bakara Market
Posted by Unknown at 1:24 PM