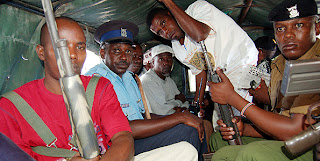 Laban Walloga | NATION Police officers guard some of the 28 alleged members of the Mombasa Republican Council arrested at a hotel in Mombasa on May 21, 2011. Police raided the hotel to stop what they called an illegal meeting since the group is outlawed.

In Summary
Twenty-eight suspected members of the outlawed Mombasa Republican Council were on Saturday arrested as they held a meeting at a Mombasa hotel.
Regular and Administration police officers raided the hotel following a tip-off.
The Republican council is said to be recruiting youth on behalf of al Shabaab, which has waged war against the government of Somalia.
Other allegations against the group include threatening to evict certain people from the Coast, destruction of voters’ cards as well as threatening to secede the coastal region from the rest of Kenya.
Mombasa AP commander Hussein Mohamed said the government is also investigating claims that retired military and police officers were training youth linked to an outlawed group.
Sources told the Sunday Nation that the group had booked itself at the hotel to discuss their fate in the face of constant harassment by security forces.
The Republican Council, which is believed to have a sizeable following at the coast, is viewed as a security threat, and Mr Mohamed said that, if found culpable, they would be taken to court.
Meanwhile, police have identified three houses at the Coast believed to be training bases for Kenyans recruited into the al Shabaab terror group.
Two suspects being held by the Anti-Terrorism Police Unit pointed out two of them in Kwale and another in the Likoni area of Mombasa.
The suspects are among a group of five men arrested two weeks ago as they headed to Somalia through Lamu, allegedly to join the ranks of al Shabaab.
Making explosives
At the time the suspects were said to have been carrying a foot switch, galvanometer, sulphur, and lidocaine among other substances believed to be used in making explosives.The five suspects — two of them minors — were arrested in a matatu they had hired to take them to Lamu. They reportedly confessed to the police that they were training in the country ahead of their deployment.The two minors are students at Vindeni secondary school in Kwale, while the third Kenyan completed school at Sheikh Khalifa secondary school in Mombasa last year, the officers told the Sunday Nation.Aziz Abdulrazul, a Yemen national who has been masquerading as a dentist, and Abdo Almohamad Mohamad, a Syrian, were also arrested.Several photographs of people wearing military garb and believed to be al Shabaab leaders were also netted in the operation.A source within the Anti-Terrorism Police Unit told the Sunday Nation that the suspects led the officers to the premises and identified them as the locations where they received instructions and inductions into the Somalia-bsed militia.
“So far they have led us to the four premises, but we are still going on with investigations,” said the officer, a member of the elite squad who cannot be named as he is not authorised to speak on behalf of the police force on the ongoing probe.
In addition to locating the bases, the team is also tasked with arresting individuals — some of them suspected to be radical Muslim clerics — who are luring young Kenyans to join al Shabaab.
However, the officer declined to say whether they had arrested anyone in the premises identified so far or whether any incriminating evidence had been found at the scenes. He also declined to reveal who the owners of the premises were.The two suspects were flown to the Coast on Tuesday from Nairobi where they had all been taken shortly after their arrest. Police said they have been helping the team with the investigations.Sunday Nation
Posted by Siad barre at 10:19 PM