Somali gov't says it made advances in Mogadishu offensive 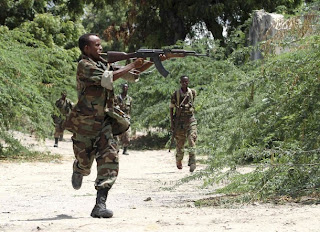 Forces of the Somali government backed by African Union peacekeepers on Sunday retook the major street in the center of the capital Mogadishu following fierce clashes with Islamist rebels.

The fighting, which has been sporadically continuing since Saturday, strengthened and spread into areas controlled by Islamist Al Shabaab fighters near the southern and western side of the main Mogadishu market of Bakara.

The Wadnaha Street has been under the control of the insurgent Al Shabaab group for the past year and half and is close to the biggest Mogadishu open market.

Somali government officials and commanders of the AU peacekeeping mission in Somalia (AMISOM) maintained that the market was used as a major base for the fighters of the radical group of Al Shabaab.

"The Somali armed forces and those of the AMISOM peacekeeping troops have been carrying out operations since yesterday (Saturday) in areas in Mogadishu against the forces of Al Shabaab making tangible advances," said Abdelhakim Haji Fiqi, Somalia's minister of defense in a press conference in Mogadishu.

"The forces took over Wadnaha Street and will continue their advances," said the defense minister, who was joined at the news conference by Interior and National Security Minister Abdelshakur Farah.

Several people including forces of the warring sides as well as civilians were reported to have been killed or wounded in the fighting.

Traders and shoppers have vacated the main market since the early hours of Sunday morning as fighting intensified between the two sides. Stray shells and bullets have reportedly hit a number of locations at the market which has remained largely deserted.

Somali government officials reassured businesses people that the "especial police force" would protect the business properties at the market, urging traders to work with government security forces once the government forces take over the market.

The Bakara market has always been fiercely contested by the warring sides and its capture would serve as a huge blow to Islamist fighters who have controlled it for the past two years and have relied on it as a hideout out and a source of essential revenue to fund its fight against the government.