Reports From The Frontlines (tf.sf)

A new military offensive in Somalia has gained ground against al-Shabab insurgents despite a bomb explosion Monday that killed five pro-government troops at a base militants fled last week, officials said.Maj. Paddy Ankunda, a spokesman for African Union troops in Somalia, said his forces began an operation last Thursday that has gained 500 yards (meters) of territory from insurgents."The territory that we continue to cover is giving us hope that, yes, we are making progress," he said.Some of the territory gained included a former Sufi shrine that al-Shabab used as a military base. An explosion ripped through the shrine on Monday, killing five troops with a pro-government militia, said Abdi Muhummad, a commander.Muhummad said he believes al-Shabab, the country's most dangerous insurgent group, buried the explosive before fleeing.Three AU troops have died so far in the operation, in addition to Monday's five deaths. Al-Shabab displayed one of the AU bodies in Mogadishu last week.

Ankunda said the AU's ultimate target is Mogadishu's main market, Bakara, which al-Shabab currently controls. He said the operation also aims to get more roads open for public use.

He said the AU has seen al-Shabab forcing local business men to pay higher taxes, a possible indication that the militants' finances are under pressure. He also called on Somalia's government to solve their political problems so they don't derail the military gains. Somalia's president and parliament are arguing over elections scheduled for this summer.Ankunda said that the AU force would kill an American fighting with al-Shabab if it could.Omar Hammami, known as Abu Mansur al-Amriki, or "the American," held a news conference in the open last week, where he said that militants would seek revenge for the death of Osama bin Laden. Hammami, who sipped coconut milk from a straw as he spoke, gave the open-air news conference about 40 miles (60 kilometers) southwest of Mogadishu."We have the interest but unfortunately we don't have the capabilities to deliver such an attack," Ankunda said. "But honestly we do have the interest." 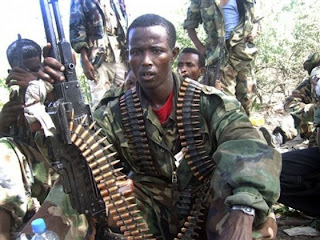 The  Somali Army with African Union force in Somalia said Monday it had seized several positions from the Al Qaeda-inspired rebels in Mogadishu in a renewed offensive launched earlier this month.The 9,000-strong force is tasked with protecting Somalia's weak transitional government, which the Shebab insurgents have been fighting to topple over the past four years.Paddy Ankunda, the force's spokesman, said the troops had seized a building, a former army base and a street from the Shebab since the fresh drive began on May 12."The objective was to take the fight to the enemy. So far we have succeeded in doing that," Ankunda said. "The main objective was to take some new roads and make them re-open for public use."He added that they were now controlling 60 percent of the capital Mogadishu. I \n February, the AU troops and government forces launched a wide offensive against the Shebab in the capital city while pro-government fighters attacked the insurgents in other regions of the country."They have made substantial progress. They have captured a number of towns (in south central Somali). They haven't lost any of these towns, which is a new trend," said Ankunda via a video link from Mogadishu."In my view, that effort is working out very well and it is stretching the insurgents beyond their capacity."In Mogadishu Monday, six fighters of the pro-government militia Ahlu Sunna wal Jamaa were killed when the Shebab attacked their position, a mosque, in the city's central Howlwadag district."Six of our fighters were killed and 12 others injured today after the terrorists fired several rounds of mortar at a base we seized from them yesterday," said Ahmed Ismail, an official of the Sufi militia."We have killed several of their fighters in the last three days and they have lost several key military positions," added Ismail. The Shebab had captured the mosque in September.The AU force first deployed in Mogadishu in 2007 and comprises troops from Uganda and Burundi. The troops have been Shebab's only obstacle from total takeover of southern and central Somalia. 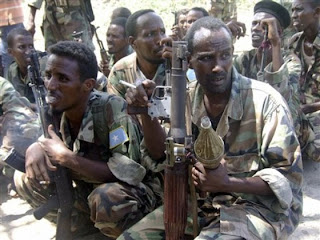 The rebels, who have sworn allegiance to Al-Qaeda, control much of the war-torn Horn of African country where they have imposed a strict brand of Islam. 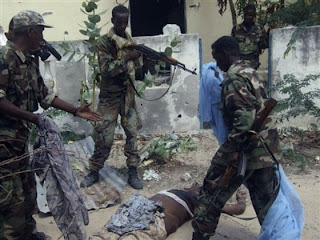