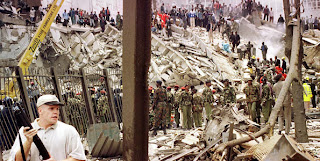 Rescuers work to help survivors amid the devastation brought in by a bomb explosion in Al-Qaeda's first major international attack near the US embassy and a bank in Nairobi on August 7, 1998 that killed about 200 people and left more than 1,000 injured. AFP PHOTO / FILES
The terrorist who planned the 1998 bombing of American embassies in Nairobi and Dar es Salaam has replaced Osama bin Laden as al Qaeda’s interim boss.

Saif al-Adel will lead the monstrous organisation pending the appointment of Ayman al-Zawahri as its new head.
Mr Noman Benotman, a former associate of Osama and now an analyst with British think-tank Quilliam Foundation, described Adel as a top al Qaeda strategist, senior military leader and mastermind of the August 7, 1998, blasts that killed over 200 people and injured thousands.
He was also instrumental in setting up training bases for the terror group in Sudan and Afghanistan in the 1990s.
“This role that he has assumed is not as overall leader, but he is in charge in operational and military terms,” Mr Benotman told agencies.
“This has happened in response to the impatience displayed by jihadists online who have been extremely worried about the delay in announcing a successor.
“It is hoped that now they will calm down. It also paves the way for Zawahri to take over,” he said. This was corroborated by Pakistan’s The News newspaper, citing unnamed sources.

Intelligence sources have for many years considered Zawahiri, an Egyptian surgeon, Osama’s successor.
Mr Benotman said the temporal appointment of Adel could have been meant to gauge how the jihadists would react to having someone born outside the Arabian Peninsula at the helm.
Fled to Iran
Adel is believed to have fled to Iran after the US invasion of Afghanistan following the September 11, 2001, suicide attacks on the United States that left more than 3,000 people dead.
The reports came as the government warned of a ‘real possibility’ of another terror attack in the region to avenge the killing of Osama by Americans on May 2 after almost a decade on the run.
Opening an Inter-Governmental Authority on Development (IGAD) workshop on terrorism in Nairobi on Wednesday, Attorney General Amos Wako called for intelligence sharing and co-operation between member states to avoid terror attacks. (READ: Drugs cash used to fund terror groups in EA)
“The key to success in the battle against this great challenge is co-operation, communication and intelligence sharing. Protecting potential targets may not stop terror attacks, but it will force them to try their luck elsewhere,” Mr Wako said.
Security has been beefed up at airports, embassies and shopping malls in major towns since Osama’s killing in Pakistan.

Police are also on the lookout for local terror operatives such as Abdalla Fazul. Fazul has been linked to the 1998 twin blasts and the 2002 attack on the Paradise Hotel in Mombasa. He is believed to be hiding in Somalia.
Others on the run are Omar Awadh Omar aka Abu Sahal, who is second in command in al Shabaab and Bilal el Berjawi, who was born in Lebanon and has a British passport.
Last month, police released a picture of a suspect identified only as “Abdullahi from Central Kenya” said to have sneaked into the country from Somalia to carry out terrorist attacks.
Also most wanted is Abass Hussein Nderitu, Ibrahim Ruta alias Musyoki Kyondi, Abdulrahma Mutua Daud, Jeremiah Okumu alias Duda Black, Abaa Mohamed Mwai, and Juma Ayub Otit Were.
Reports have previously linked Adel to the 1981 assassination of Egyptian president Anwar Sadat. He is believed to have left Egypt shortly after the assassination and made his way eventually to join the U.S.-backed mujahedin fighting in Afghanistan. He is believed to have made contact with al Qaeda around this time and found himself rising up the terrorist organisation’s ranks, moving with other key al Qaeda operatives to Sudan in the 1990s, where he allegedly taught recruits how to handle explosives.

Pakistan’s The News International reported that whereas Zawahri will remain the terror group’s spiritual leader besides monitoring international contacts, active command and control will be in Adel’s hands.
According to German magazine Der Spiegel, Adel and a number of other prominent al Qaeda members fled the US invasion of Afghanistan and in unclear circumstances, ended up under house arrest in Iran.
By October last year, Adel was back in the al Qaeda fold, possibly moving among other militants in Pakistan’s troubled North Waziristan tribal agency.
Believed to be in his fifties, Adel’s full name means “sword of justice.” Like Bin Laden and Zawahri, Adel also has $5 million bounty on his head.nationmedia.com
Posted by Unknown at 4:17 AM