Unionist SSC With Puntland Army Clash and Tribal Secessionists Somaliland Gambara near Tukaraq district in Sool region, some 28 kilometers away from the provincial capital of Las'anod Clash in Sool Region 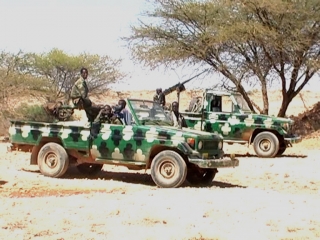 Unionist  scc with  Puntland  Army and  Tribal Secessionists Somaliland forces have today clashed in Gambara near Tukaraq district in Sool region, some 28 kilometers away from the provincial capital of Las'anod, after Somaliland forces moved towards Unionist scc and Puntland's base in Tukaraq.

Witnesses told Somalia Report that  Tribal Secessionists Somaliland forces with tanks and armored vehicles were seen moving towards the direction of Gambara earlier in the morning and fierce clashes followed around 12:00 PM local time (0900 GMT)

Sources from Garowe, Puntland’s capital, told Somalia Report that  Tribal Secessionists Somaliland forces clashed with the Sool, Sanaag & Cool (SSC) militia, a group is opposed to the government in Hargeisa, in the outskirts of Gambara. The fighting forced the SSC militia to retreat back to the Puntland base in Tukaraq village thus prompting Puntland forces into an unexpected battle with Somaliland.

“Puntland forces were caught in the middle after SSC and Somaliland fought somewhere near Puntland military base,” the source said.
Puntland’s former Aviation and Ports Minister Ahmed Ali Osman Karash, who now leads an armed militia to fight against Somaliland’s presence in the region, exclusively talked to Somalia Report while in Tukaraq.

He said that Somaliland military forces attacked his forces and the SSC militia a few kilometers away from Tukaraq.

“They attacked our forces as well as of those SSC in the outskirts of Tukaruq, and we resisted the offensive of Somaliland," he said.

Meanwhile, Colonel Ali Sabaray, the deputy leader of SSC told the local media that his militia captured a tank from Somaliland forces and a number of other military equipment, but could not confirm the number of casualties.

"We have managed to push the enemy back to their territory. We have captured a number of their military equipment,” said the colonel.
Puntland’s Information Minister Ahmed Ali Askar held press conference in the capital of Garowe and said that three of Puntland’s defense forces were injured in the fighting but no one was killed as far as Puntland’s side is concerned.

“Three of our forces were injured and are now being treated in Garowe. That’s the only casualty so far,” he explained.

He blamed the break-away administration of Tribal Secessionists Somaliland for provoking Puntland by attacking its territory.
Posted by Siad barre at 4:21 AM