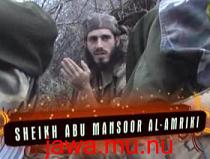 An American-born member of Shabaab, al Qaeda’s affiliate in Somalia, has released a propaganda tape that is aimed at recruiting Westerners to wage war against their home countries and establish an Islamic caliphate in the Middle East. The audiotape, titled “First Stop Addis,” features Abu Mansour al Amriki and other members of Shabaab. On the tape, Mansour and three unidentified “North American Brothers,” and a Somali, sing a nasheed, or a song without music, in English, extolling the virtues of global jihad. Images of Shabaab forces in combat appear throughout the tape. Amriki, whose real name is Omar Hammami, is a US citizen who converted to Islam and traveled to Somalia in 2006. Once in Somalia, he quickly rose through the ranks, and now serves as a military commander. Amriki also began appearing in Shabaab propaganda tapes. “Guerilla warfare from Mogadishu presents… First Stop Addis,” Amriki’s latest tape begins. Addis is a reference to Addis Ababa, the capital of Ethiopia. After Ethiopa ousted the Islamic Courts from power in Somalia during an invasion in December 2006, Shabaab began threatening to target Ethiopa. The tape stresses that Shabaab’s war is not confined to Somalia but is global in nature. “From Somalia and Shiishaan (Chechnya), from Iraq and Afghanistan, gonna meet up in the Holy Lands, establishing Allahs Law on the land,” Amriki says in a chorus repeated throughout the song. Amriki and others identify their enemy as the “salib,” or crusaders. The …

That guy can't even rap.