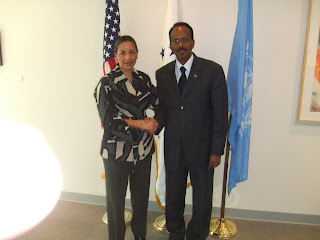 NEW YORK—Somalia would welcome a U.S. special-forces attack on al Qaeda-affiliated militants on Somali soil, similar to the strike that killed Osama bin Laden in Pakistan, said Somali Prime Minister Mohamed Abdullahi Mohamed on Wednesday.
"I would prefer training so we can do it ourselves," Mr. Mohamed said in an interview. "But in the absence of that, if there is a target or a threat to dismantle, I would welcome it." U.S. officials declined to comment.
The remarks from Mr. Mohamed, a U.S. citizen who heads a weak interim government, stand in contrast to Pakistan, which blasted Washington over a breach of its sovereignty after the U.S. didn't inform Islamabad in advance of its raid to kill bin Laden.
A U.S. strike in Somalia wouldn't be without precedent. In 2008, a U.S. military airstrike killed a man believed to be al Qaeda's top commander in the country.
Bin Laden's death could weaken Somalia's al Shabaab, the al Qaeda-affiliated movement, by depriving it of funds and financing, he said. But "the movement is far from over" especially in Somalia, because al Qaeda is "not a one-man show," he said.
Mr. Mohamed warned that al Shabaab has the capability to strike outside of Somalia, including Western targets. "We are the first line of defense," he said.
The group carried out an attack in Uganda last year and vows to continue foreign strikes. "But if we push and pressure them in Somalia, they may not have the time and luxury to prepare for outside attacks," Mr. Mohamed said.
That is why, he said he tells Western leaders "we are not only doing this to protect ourselves and our people, we are protecting you, too." To help defend the West from possible attacks organized by al Shabaab, Mr. Mohamed added that Somalia needs "the same attention as Afghanistan and Iraq" from the West. "You have to fight Somalia and Afghanistan at the same level and intensity," he said.
"If supposedly NATO wins the war in Afghanistan, do you know where [the militants] will go?" he asked. "They will go to Somalia." The Horn of African nation is attractive to jihadists because like Afghanistan, it is Muslim, has a tribal political and a very weak central government that does not control all of its territory, he said.
Mr. Mohamed said 1,000 foreign fighters loyal to al-Qaeda had helped local Islamist militants take control of 90% of Somalia's southern region. In the past six months he said Somali and African Union forces had been able to regain 20% of the country from the militants, mostly because his government had started regularly paying its troops.
Asked if he sought NATO intervention, the prime minister said the country had 8,000 Somali soldiers, backed up with 9,000 African Union troops, with another 4,000 on the way.
"What we need is air power," he said. "Sometimes you have places where you cannot fight them in conventional way. You need some high-tech weapons to fight them."
But Mr. Mohamed said he was not ready to ask NATO for such help until his own ground troops were first properly trained and equipped. While Somalia "may not need American or NATO boots on the ground" it did need the resources for the Somalia and African Union troops to fight the jihadists.
"I think together, we will be able to face the enemy," he said. "Because if we don't face this group, in my opinion, they will not stay there. They will come after the rest of the nations." WSJ
Posted by Siad barre at 5:45 PM