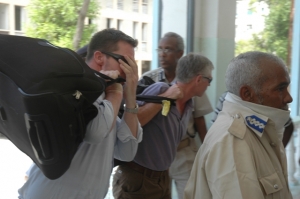 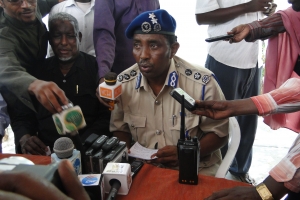 Two Americans, two Britons and two Kenyans were Tuesday arrested at Mogadishu’s Aden Adde international airport in possession of $3.6 million believed to be ransom money due to pirates after their aircraft made an unscheduled stop, a Somali police official said.

Police Spokesman Abdullahi Hassan Barise told   press conference in mogadishu ,  that the departure point of the two aircraft was unknown, and they may have landed unexpectedly due to a shortage of fuel. Ransom money is often delivered by light aircraft which leave the Kenyan airstrips of Wilson, in Nairobi, or Laikipia.

Ministers from the Transitional Federal Government, which does not approve of the payment of ransoms, were locked in an emergency meeting, and the money was taken to the Central Bank of Somalia. 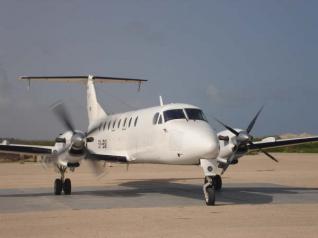 Sources close to pirate groups over the weekend told terror free somalia  that ransom payments were due to be dropped for both the Egyptian-owned MV Suez and Chinese-owned MV Yuan Xiang, but it was not immediately clear if the money in the possession of the arrested parties was being delivered to either or both of these ships. te understands $2.5 million was to be delivered to the MV Yuan Xiang on Tuesday, while an unknown sum was terror free somalia be dropped onto the MV Suez.

The MV Suez was hijacked in the Gulf of Aden on August 2, 2010 as she transited from Pakistan to Eritrea. The crew is comprised of 6 Indians, 4 Pakistani, 4 Sri Lankans and 11 Egyptians. The vessel is managed by Red Sea Navigation Co, based in Port Tawfiq, Egypt.

The MV Yuan Xiang and its 29 Chinese crew members were seized 650 nautical miles east of Salalah, Oman on November 13, 2010. The Panama-flagged vessel is owned and managed by Ningbo Hongyuan Ship Management Ltd.
TF.SF Exclusive
Posted by Unknown at 3:53 AM