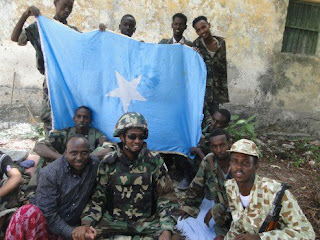 update on Victorious TFG takes over Mogadishu.Frontlines: War Images
MOGADISHU — Somali government troops backed by African Union forces advanced Sunday towards Mogadishu's main market, a stronghold of the Islamist Shebab rebels, amid a heavy firefight that claimed two lives.The forces attacked a position of the Al Qaeda-inspired insurgents near the Bakara market, an economic lifeline of the war-torn city, officials and witnesses said."The national army and the African peacekeepers have taken control of several key locations near Bakara market after defeating the violent elements," said Warsame Mohamed Hassan, a government security official."They are now retreating to the market. We are not planning to engage in fighting inside the market."Ali Muse, the head of Mogadishu's ambulance service, said two civilians were killed and 22 others wounded in the fighting.On Friday, the AU force said it would not bombard Bakara market in its drive to flush out the Shebab from the populated hideout."We reassure all civilians and the business community that plans to flush extremists out of the market will be conducted with the greatest care to ensure minimal harm and damage," the force's spokesman Paddy Ankunda said.The AU troops launched a new offensive against the Shebab on May 12 and said they had seized positions from the insurgents in Mogadishu.
Two decades after Somalia plunged into a civil war, it has had no central government and the current transitional administration has been unable to exert authority across the country and restore stability since its formation in 2004.   AFP.
Posted by Siad barre at 8:49 AM