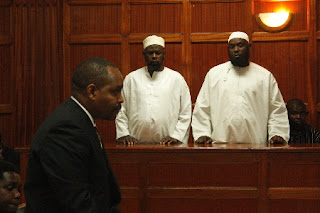 Police are questioning three men alleged to have returned to Kenya after joined Somalia's al-Shabaab militia. The men's identification and travel documents were confiscated by the CID in Mombasa. Sources said the police took the documents early this year after they gathering information on their former activities.
Council of Imams and Preachers of Kenya South Coast chairman Amir Banda said the men had gone to Somalia in 2002 and returned in 2007, just before the elections. “There was a lot of campaigns by religious leaders to have the men brought back since they have families and their transition to Somalia was done secretly. The men didn't know what they were going to face,” he said.
Banda said the three were promised lucrative jobs, only to land in the war-torn country, where they underwent torture after being forced by the militants to engage in wars. The men who have since their return gone into business and farming in Ukunda still cannot associate freely with others. They don't even go to mosques. They also don't talk about their ‘failed’ mission in Somalia fearing further victimisation.
They are believed to be the first Kenyans sent to Somalia, to ever come back alive.
Banda said the Muslim community has continued with its campaigns against recruitment of youths by the al Shabaab although more than 50 men are believed to in Somalia already.
The Coast CID boss, Ambrose Munyasia said the matter may have been handled by the Diani CID officers and promised to give feedback over the same. the STAR 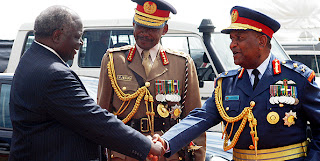 The military is awaiting orders from President Kibaki to attack militias from neighbouring countries that have encroached on Kenyan territory. Defence assistant minister David Musila said on Thursday the Armed Forces were ready to defend the country from foreign aggression.However, he said, the orders could only be issued by the President, who is the Commander-in-Chief of the Armed Forces.“The international norms on military deployment are very categorical. You cannot cross an international border without the orders of the Commander-In-Chief,” he said.He added: “As and when those orders are given by the Commander-In-Chief, our forces will move in.They are ready at any time to defend the integrity of our borders.”Mr Musila spoke a day after Prime Minister Raila Odinga accused the military of failing to protect Kenyans from external aggression along its problematic borders with Uganda, Sudan, Ethiopia and Somalia.Citing the recent attacks in Turkana, where 20 Kenyans were killed by Merille tribesmen from Ethiopia, the PM said the military, not the police, should be blamed.“The responsibility of protecting our borders is that of the military and not the police. We spend a lot of money on the military. We recruit, we train, we promote and maintain them until retirement when there is no war. Therefore, when people invade our territory, there should be no question on who should be responsible,” he said.

The PM, who was issuing a statement on security in Todonyang, Turkana North District, said that specific instructions had been given to the Defence ministry to safeguard Kenya from external aggression on all fronts, including Migingo and Ugingo islands.MPs accused the government of being too soft on aggressors, and demanded immediate action to kick out the Merilles and Ugandan forces from Migingo. Kenya’s relations with Uganda were strained two years ago after Kampala sent soldiers to Migingo Island on Lake Victoria, resulting in a protracted border dispute.On Thursday, Mr Musila said the military had not been deployed in Turkana as that would have amounted to a declaration of war on Ethiopia, whose tribesmen have invaded Kenyan territory.“For the military to go to an international border, it would mean a declaration of war on a neighbour. We are careful and it will be done within international norms of deploying armed forces,” he said.Such an act, said the Mwingi South MP, will cause tension and turn Uganda, Sudan and Ethiopia into hostile neighbours.He said this was largely the reason the government always deployed the police and General Service Unit to contain tensions on the border.“We rely on the police and the GSU to contain the situation within our borders,” he said. daily nation
Posted by Siad barre at 4:54 AM