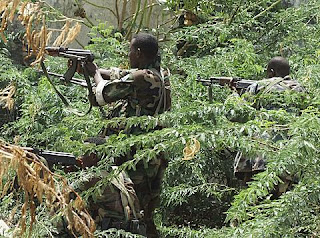 update on Al Shabaab beaten back to Bakara:Somalia's Al Qaeda-linked insurgents are slowly losing ground to African Union troops and government forces in Mogadishu
As international troops close in on Mogadishu's Bakara market, a stronghold of the militant group al-Shabab, an analyst from the International Crisis Group is warning that seizing the critical position could prove to be complicated and costly.

Much of the military campaign in Somalia's war-torn capital, Mogadishu, has been a battle for Bakara market. Sitting on top of a hill in the city's main business district, Bakara is a nerve center for much of southern Somalia, and has served as a stronghold for the al-Qaida-linked insurgent group al-Shabab for the past half decade.

For the African Union Mission in Somalia (AMISOM) moving towards the market has been a key goal for the past year. During the September "Ramadan Offensive" the government and international troops touted significant gains made in nearby neighborhoods such as El Hindi.

A Somalia analyst for the Brussels-based International Crisis Group (ICG), Rashid Abdi, explains the importance of Bakara to the AMISOM mission.

"Strategically, of course, it really denies al-Shabab a place they have been using for the last five or six years to launch mortar attacks and basically to recruit and also to extort money from traders," said Abdi. "So if AMISOM is about to take control of Bakara market then that will be a very significant victory and a big blow for al-Shabab."

According to recent reports, AMISOM and forces of Somalia's Transitional Federal Government (TFG) have closed in and appear to be tightening their grip on the position that has eluded them for so long. AMISOM says two soldiers and 20 insurgents were killed in fighting around the market in the past few days. The insurgents have reportedly begun to dig trenches to prevent tanks and vehicles from entering, and civilians are beginning to flee in advance of the fighting.

African Union and Somali government forces have promised not to bomb or even enter the market, but rather to cut off critical al-Shabab supply lines and squeeze the insurgents out. But ICG's Abdi warns that any major fight will be difficult for government and AMISOM troops.

The other problem is civilians. Bakara is the busiest, most populated part of Mogadishu, and perhaps the largest legitimate component of southern Somalia's economy remaining after two decades of chaos and war. With al-Shabab hiding behind it, Abdi fears the worst.

"They use the civilian cover there and so it has been very difficult for many of the past TFG government to move in because of the fear that that will cause massive civilian casualties," added Abdi. "If AMISOM is closing in and about to take it, then the question is: "at what cost?"

Al-Shabab still controls parts of Mogadishu and much of central and southern Somalia, though AU and government forces have been gaining ground.

On March 22, just 60 days ago, Somali Prime Minister Mohammed Abdullahi Mohammed pledged to remove al-Shabab within 90 days. With a month left, the world will be watching to see if Somali and international forces can make good on his promise.
Posted by Siad barre at 2:12 PM