The United States reiterated its strong support for the critical role that the African Union plays. 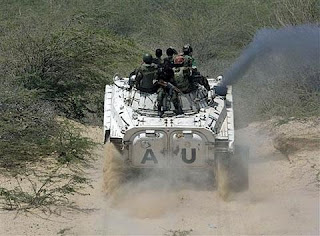 African Union peacekeepers in Somalia patrol in a tank as they assist Somalia government forces during clashes with Islamist insurgents in southern Mogadishu, Somalia, March 9, 2011.

Following two days of meetings in Washington, the United States reiterated its strong support for the critical role that the African Union plays in promoting democracy and good governance throughout the continent.

The talks, the second annual meeting of senior level officials to discuss how our country and the AU can cooperate to address mutual interests and common values, produced agreement on a range of critical issues of interest to both parties. The two are working for full implementation of the Comprehensive Peace Agreement in Sudan, sustaining the peacekeeping mission deployed in Somalia and helping to restore democracy in Guinea and Niger, and return to development in those countries. The A.U.'s strong united position in support of President Alassane Ouattara helped bring an end to the long-running political crisis in Cote d'Ivoire.

Regarding the situation in Libya, the U.S. acknowledged the A.U.'s efforts to achieve a ceasefire there and agreed on the need for an immediate cessation of hostilities, the delivery of humanitarian aid to needy populations, and the protection of foreign nationals and promoting an inclusive dialogue process. VOA

Our country looks forward to continued engagement with the A.U. on a range of critical issues of interest to both parties as we strive to foster a stable and strong global community.
Posted by Unknown at 5:30 PM