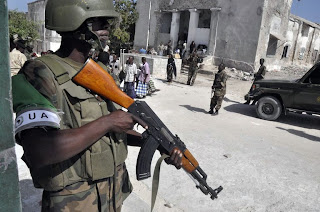 AU force says gaining ground from Somali rebels
NAIROBI (Reuters) - African Union peacekeepers have seized territory from Somali insurgents in the capital Mogadishu in a new offensive that is slowly closing in on the rebels' main stronghold, a force spokesman said on Monday,Major Paddy Ankunda said the deployment of up to 3,000 more peacekeepers, which would take the AMISOM force to 12,000 soldiers within the next two months, would help squeeze the rebels out of the heavily populated Bakara market."The idea is that when we get new troops, we should be able to expand our fronts and then realise a new effort to push the insurgents out of the ... Bakara market which is their main source of finances," said the Ugandan officer, speaking to reporters from Mogadishu by video link.Detailing sites now under government control, Ankunda showed the front line shifting to within 200 metres of the southern fringe of Bakara market and within several hundred metres of the market's northern and western boundaries."The territory which we continue to recover is giving us hope that yes we are making progress and we should be able to flush them out," Ankunda said.Somalia has been bogged down in violence and awash with weapons since the overthrow of siad bare in 1991, with warlords and now Islamist militants stepping into the power vacuum, and allowing piracy to flourish off the country's shores.Somali government forces backed by the peacekeepers launched the new military push on May 12 and have seized several strategic positions from al Qaeda-affiliated al Shabaab insurgents.Three peacekeepers -- two from Uganda and one from Burundi -- have been killed since Thursday, while AMISOM claimed the scalps of al Shabaab's top commander in Bakara market and his chief intelligence officer, Ankunda said.It is the second offensive this year to regain control of insurgent-held neighbourhoods and weaken the rebels fighting to overthrow the Western-backed government, before ultimately flushing them out of the capital.AMISOM says its forces now control more than 60 percent of the capital. Horn of Africa experts say they are all that prevent the insurgents from toppling an administration plagued by internal rifts and corruption.A power struggle among the country's political leaders is opening the way for the Islamist militants to regroup and risks undermining the military gains being won.It is widely acknowledged that al Shabaab cannot be defeated militarily without political reform aimed at ending two decades of ineffective government."The military serves the political objective. So if the politicians are fighting amongst each other then the objective that we serve is not very clear," Ankunda said, appealing to political leaders to settle their differences in order not to jeopardise the military gains 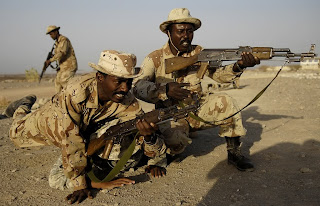 .Djibouti sends troops to turbulent Somalia
NEWS:Al shabab threatens Djibouti for sending soldiers!
Somalia’s rebel al-Shabaab militia warned neighboring Djibouti against sending troops to the war-torn country on a day it claimed at least 20 pro-government soldiers were killed in an attack in the capital, Mogadishu.
“We have already dragged the bodies of invaders like Ugandans and Burundians in the streets of Mogadishu and in case the Djiboutian troops arrive in our land, they will be dealt with in the same manner we have treated the invaders,” Sheikh Ali Mohamud Rage, al-Shabaab’s spokesman, told reporters today in Mogadishu.
Djibouti plans to send troops to Somalia later this month or early in June, Voice of America reported on May 14, citing Foreign Minister Mahamoud Ali Youssouf. It didn’t say how many soldiers would be deployed.
Al-Shabaab, which the U.S. accuses of having links to al-Qaeda, has been battling Somalia’s government since 2007 as it seeks to establish an Islamic state. Uganda and Burundi have more than 6,200 soldiers in the country to support the Western-backed administration, which is trying to establish the first functioning government since the ouster of Mohamed Siad Barre, the former dictator, in 1991.
Earlier today, al-Shabaab carried out a mortar attack in Hodan in the south of Mogadishu, killing at least 20 members of the pro-government Ahlu Sunnah Waljamaah militia, an al-Shabaab official said. The official spoke on Radio al-Furqaan, a Mogadishu-based broadcaster, which didn’t identify him.
“At least half a dozen mortars landed at Hodan district and I saw two battle wagons carrying casualties from the soldiers’side,” Mumin Omar Abukar, a resident of Hodan, said by phone from the area today.
bloomberg
Posted by Unknown at 1:49 PM