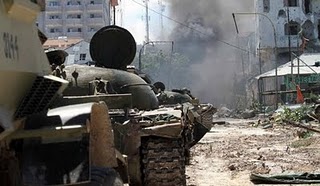 Mogadishu, Somalia (AHN) - A meeting between Al-Shabaab officials and representatives from the committee of Bakaara Market traders ended in smoke Wednesday after the militants refused to relocate from the market as the business community demanded, All Headline News has learned.
One of the market representatives in the meeting, who demanded anonymity for security reasons, told AHN by telephone that they failed in their attempts to persuade the militants to retreat from the market in a bid to save merchants' properties there."Yesterday we have had a four-hour-long meeting with top officials from Al-Shabaab and they threatened that they will kill us if we once again ask them to leave the market," the unnamed business man said Thursday."We have too large businesses here in Bakaara Market so it seems that many of us will lose their properties, because the militants want to use the market as their last trench and that will endanger our businesses," the trader lamented.
Bakaara Market, which is the largest insurgent hotbed in the capital, is now partly surrounded by Somali government forces .

Al-Shabaab has pulled back most of its foreign commanders from the capital, according to sources close to the militant group. Its leader, Sheik Mukhtar Abdirahman Abu Zubeyr, whose real name is Ahmed Abdi Godane, also has reportedly left the city and relocated to the southern Jubba regions.