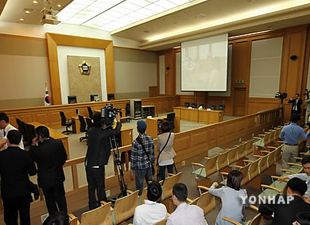 update SKorean court hands life sentence to Somali pirate
Prosecutors are seeking the death penalty for one of the Somali pirates who hijacked the South Korean freighter “Samho Jewerly” in January.

On Friday, the fifth day of the trial being held in Busan, the prosecution said that Arai fired at Captain Seok Hae-kyun. It added that the pirates were vicious in their crime to use Korean sailors as human shields during the Korean Navy’s rescue operation. Prosecutors demanded lifetime imprisonment for three other pirates who were arrested along with Mahomed Arai. The lawyers defending the pirates said that no one saw Arai shooting the captain and denied the claim of using sailors as a human shield. KBS
10th Somali pirate pleads guilty to yacht hijacking
WASHINGTON — A tenth Somali man arrested on charges related to the hijacking of a yacht off the coast of Oman in February pleaded guilty Thursday to piracy charges for the attack that left four Americans dead, US prosecutors said.Mahdi Jama Mohamed was latest of the 15 individuals -- 14 from Somalia and one from Yemen -- arrested after the attack for their roles in the kidnapping and killings, to plead guilty in a federal court in the eastern state of Virginia."
The pirates' greed for tens of thousands in ransom money ultimately led to the cold-blooded murder of the four US hostages off the coast of East Africa, said US attorney Neil MacBride in a statement."Modern-day pirates are dangerous criminals, not the swash-buckling rogues portrayed in Hollywood movies, and this latest guilty plea shows that attacks against American vessels will be met with swift justice in an American courtroom."Mohamed, according to the FBI, was a "willing conspirator in the planned attack to hijack a vessel for ransom," and it was his own "avaricious behavior" that led to his involvement in the plot.The owners of the yacht Quest, Jean and Scott Adam, were Christian missionaries based in California who were sailing around the world at the time of the hijacking.They were shot to death, along with their companions Bob Riggle and Phyllis Macay from Seattle, Washington, several days after being taken hostage and as negotiations were taking place with US Navy officials.The guilty announcement are part of plea agreements that will allow them to avoid the death penalty, but face life in prison.According to Mohamed's plea agreement, US prosecutors said he admits joining the pirates that took the vessel, but said "he did not personally shoot any of the four Americans, nor did they instruct any other person to shoot the hostages."Plea deals allow defendants to seek reductions in their sentences.Accused Somali pirate Mohammad Saaili Shibin, said to have been the chief negotiator in the hijacking, was indicted on charges related to the killings earlier this year.US service members, who had been trailing the yacht during the hostage drama, boarded the vessel after hearing gunshots and discovered the Americans' bodies, according to US officials.The US military said it had undertaken negotiations, led by Shibin, to secure the release of the hostages at the time the pirates fatally shot their captives.
Hijacked MV Khaled Muhieddine K Released 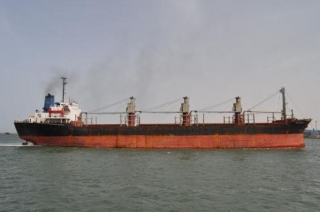 MV Khaled Muhieddien K
Somali pirates today announced they freed the Syrian owned bulk carrier MV Khaled Muhieddine and her 25 crew members, four months after it was hijacked, but it has not yet sailed away.

Sources tell local radio that pirates are fighting over the distribution of the ransom, which was delivered early this morning. The ship is set to depart once the squabble is resolved.
The bulk carrier was seized on January 20, 2011 in the North Arabia sea, approximately 330 nautical miles southeast of Salalah, Oman.The Togo flagged vessel was built in 1981 and is managed and owned by Damak Maritime of Syria. She carries a crew of 22 Syrians and 3 Egyptians.
Posted by Unknown at 5:03 AM