update on Aid pirates: Somalia fails to account for millions in assistance 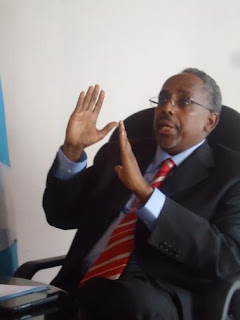 Somalia's Finance Minister Hussein Abdi Halane and Minister of Information Abdukarim Jama Halane said the Associated Press reporting of a leaked document that accuses the TFG of mishandling at least $300 million USD is 'irresponsible.'
The funds, according to the yet to be published report, covered the disposition internal revenues and contributions from Arab states. The foreign minister claimed during a Friday press conference in Mogadishu that the report information was unverified and amounted to mere speculation and rumor.
He stated that the current government is more transparent and accountable with regard to the intake and management of government funds and how to spend them. The two ministers further stated that, since they took over their respective offices, there has not been a single arrest for financial corruption.
“The same income that was taken in by the government several years ago and stolen or otherwise misappropriated by former ministers is now (due to the lack of corruption) sufficient to ensure prompt and regular payment of government staff whether they are military or civil servants,” Abdikarim Jama said.
The US-based Associated Press news service reported that Abdirasak Fartaag, head of the Public Finance Management Unit, denied published reports that the government has misused more than $300 million USD, including internal revenues, derived specifically from the port, airport, khat trade, the regional telecommunications industry, and Arab states between 2007 and 2010.

“When you are talking finance you need facts, statics, and documented evidences, which is currently lacking and thus mere speculation. It is regrettable that the Associated Press reported that, of the $300 million missing monies, $70 million USD from foreign assistance is missing.”
Speaking about Fartaag’s Public Finance Management Unit, which is responsible for the government’s overall financial management, Finance Minister Halane said, “There is no watchdog of finance management in the government. The Ministry of Finance is in charge, but we also have oversight from a parliamentary committee, as well as an accountant general. If you are looking for financial records then go to the accountant general or to the Ministry of Finance, as there is no one else who can produce any accurate and untarnished financial information.”

The information minister said that Abdirasak Fartaag used to work in the prime minister’s office, but was dismissed in January 2011. Further, he noted, “This gentleman is neither responsible for finance nor an employee of the current government.”

Both the finance and information ministers clearly stated that the claim in the Associated Press story was influenced by opposition political agendas and people who want to damage the reputation of the government. 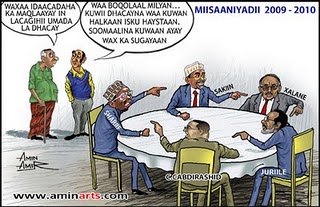 “We do strongly believe that that is not the case, that these large amounts of money were never received by our government, and this story has damaged the reputation of the government. We take exception to this and find it a case of extremely irresponsible reporting,” he added.

Although the Associated Press reported that Fartaag’s claim was based on interview with politicians who witnessed the payment or received money in Mogadishu, the Somali finance minister said that the author of the report "spoke to none of the people who manage the government’s finances, whether it is the minister of finance or the accountant general."
Finance Minister Halane also denied that he told the Associated Press that he had seen the prime minster personally receive $5 million USD in cash on two separate occasions.
Despite the surprise of the TFG at allegations of corruption and mismanagement at the press conference they offered no direct rebuttals or proof to refute the charges contained in the report. In 2010 Somalia was rated #178, dead last, on Transparency International's scale of perceived corruption.
Editor's Note: Although the TFG attacked the Associated Press for running the story, the information was not gathered by Katharine Houreld of the AP but from a report generated by the Somalia Public Finance Unit. Houreld has broken a number of stories on Somalia and this most recent scoop has been widely syndicated.
Posted by Siad barre at 1:03 PM